Discover the 6 projects shortlisted for the ILUCIDARE Special Prizes 2020 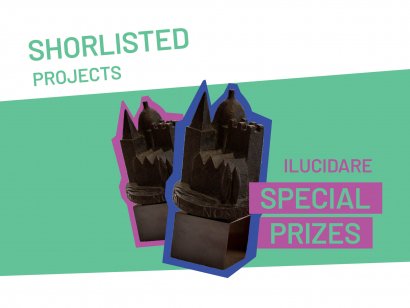 We are proud to announce the shortlisted projects for the 2020 and very first edition of the ILUCIDARE Special Prizes within the European Heritage Awards / Europa Nostra Awards! These projects are outstanding examples of heritage-led innovation and international relations around Europe.

The 6 shortlisted projects will bring inspiration in the ILUCIDARE community, not only for their peers but also for policy-makers to support heritage as a dynamic and creative field.

TYPA is dedicated to the preservation of print and paper heritage and the promotion of international relations. Visitors can try the restored machines, allowing the museum’s collection to act as a fully functional print studio. This represents a practical solution which strikes a balance between use and preservation, including the intangible heritage of skills and knowledge related to print and paper heritage. International collaboration is nurtured through, among others, an artist-in-residence programme and the hosting of volunteers through the European Solidarity Corps.

“The Estonian Print and Paper Museum is a clear example of heritage-driven innovation. Its unique training and capacity-building activities support the collective transmission of a fragile European intangible heritage.  The innovative aspect of this museum lies in its unique concept, the combination of contemporary tools and historical printing and papermaking techniques, and public engagement model”, the ILUCIDARE Jury noted.

Smart Heritage City is a European cooperation and EU-funded project that has developed a technological solution to improve the management of historic urban centres. It is being tested in the Spanish city of Ávila. The study has been developed by a consortium of seven Spanish, French and Portuguese institutions.

“By developing a network of sensors linked to a self-diagnostic web-based and open source assessment tool, this project is a brilliant example of heritage-led technical innovation. At the same time, it is also an example of an assimilation of an innovation, since it applies innovations developed in other fields to heritage assets. The smart and original solution tackles different aspects of heritage management in a holistic way, including environmental and safety issues, leading to better decision-making. It also has a huge potential to be replicated in other urban heritage contexts across Europe”, the ILUCIDARE Jury noted.

St. John’s Bulwark is a conservation project that has innovatively restored and redeveloped a 16th-century defensive feature in the city of ‘s-Hertogenbosch. The project recovered and preserved the archaeological remains of the original structure, and incorporated modern design and material in a new structure. Removable dam (weir) inserts in openings of the flood walls around the terrace protect the structure from winter and spring high water flooding. Higher barriers can be set in place to protect the Bulwark from extreme high waters.

“This project is a bright example of how new knowledge and new ideas can be developed through the intersection of disciplines, in this case, the combination of traditional conservation and modern visualisation and design. The innovative aspect of the restoration lies in the quality rehabilitation of an historic building while simultaneously tackling present-day issues, such as water safety and climate change effects, and providing facilities for the local community”, the ILUCIDARE Jury noted.

The UK-based organisation Friends of Czech Heritage raises awareness of the importance of Czech heritage both in the UK and in Czechia on a voluntary basis. With limited resources, the organisation supports conservation projects with small stimulus grants. In all aspects of their work, The Friends of Czech Heritage operate on a close collaborative basis with local organisations, authorities and volunteers. A minimum of five working parties take place each year, each lasting one week and including up to eight volunteers.

The ILUCIDARE Jury praised the organisation’s open approach: “There is a close, trust-based collaboration between British and Czech parties, including volunteers and professionals, which is carried out on equal footing. Its community-oriented focus is also commendable”.

Archaeology for a Young Future prompts school students in Italy and Syria to discover their own, local history through archaeology and to virtually exchange these histories with each other. This innovative programme has led participants, aged 11 to 14 to realise the value of archaeology, discover new places and become more deeply connected to their own localities. The online exchange gave many students their first experience of international cultural exchange and common understanding of shared heritage.

“Archaeology for a Young Future is a strong example of how heritage can lead to people-to-people dialogue. This project promotes intercultural exchange and mutual understanding between students, teachers and local communities from Italy and Syria. It is a small-scale project with a bottom-up approach and modest budget, making it easy to replicate anywhere in Europe or beyond”, the ILUCIDARE Jury emphasised.

German-Polish relations and the German-Jewish heritage of Wrocław are the primary focus of the resident Oppenheim Foundation’s activities. The Oppenheim House is a multifunctional cultural centre that boasts fragments of Baroque and Jugendstil wall paintings, Gothic and Renaissance stone fragments, and Gothic masonry which have been carefully restored. A research project into the German-Jewish-Polish social history of the house was undertaken in parallel to the restoration.

“The project is a clear example of how mutual understanding and intercultural exchanges can be advanced by unveiling the multilayerdness of cultural heritage. At the same time, these values contribute to and are reflected in the conservation of the building itself. In particular, the strong connection of the conservation works with the site’s history and original context are commendable”, the ILUCIDARE Jury emphasised.

Apply for the next edition of the ILUCIDARE Special Prizes!

The Call for Entries for the 2021 edition of the Awards is now open and the application forms are available on the Awards website. Submit your exemplary project and share your expertise and success!

The press release announcing the ILUCIDARE Special Prizes shortlist is available in 11 languages.