ILUCIDARE session at the 6th Heritage Forum of Central Europe 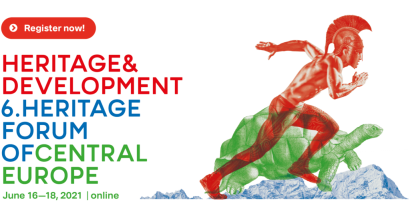 What innovation can bring to heritage and how heritage can inspire innovation? A new dimension of heritage-related research in the ILUCIDARE project.

The idea that heritage and innovation are essentially antithetical has long shaped our thinking about the past and its uses. However, over the last decade or so, heritage and innovation – namely the past and the future, the old and the new, the physical and the digital, tradition and change – have gradually ceased to be considered adversaries and, instead, have been recognised as powerful allies that are capable of jointly contributing to social and political change, as well as economic development in Europe and beyond. It has become evident that innovative and creative uses of the past can play a vital role in building a better future.

The aim of the session is to discuss several examples of heritage-related projects and research – particularly those carried out within the framework of the ILUCIDARE project – and, consequently, investigate the mutual dependencies between heritage and innovation. By bringing together an international group of heritage experts and professionals, as well as juxtaposing new research findings with a variety of grassroot heritage activities undertaken in recent years, the session will invite one to acknowledge European cultural heritage as an important resource for innovation and international cooperation. In short, it will argue for a major innovation-oriented paradigm shift in heritage production, preservation, and management.

To discuss and share experiences we will count on Charlotte Biszewski (TYPA Museum - winner of the ILUCIDARE Special Prize 2020 in Innovation), Barbara Fogarasi (Eötvös Loránd University), Pavol Ižvolt (Monuments Board of the Slovak Republic) and Aziliz Vandesande (KU Leuven, ILUCIDARE scientific coordinator). The session will be moderated by Joanna Sanetra-Szeliga, Jimena Quijano and Jan Strycharz from ILUCIDARE.

The Heritage Forum of Central Europe is a cyclical, biennial event organised by the International Cultural Centre in Kraków. It is an interdisciplinary platform for meetings and discussions on the relations between the past and the present informed by the broad understanding of heritage. The Kraków conference is the voice of Central Europe on the philosophy, management, protection, economics, politics and social issues of cultural heritage.

More information about the event.