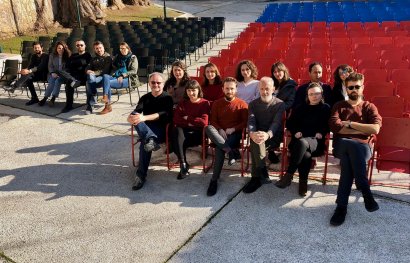 ILUCIDARE kicked-off its first capacity-building in Prizren in the week of 2-6 March 2020. KEA, IMEC and KU Leuven steered the mission supported by the local partner CHwB Kosovo.

The goal was ambitious: to lay the foundations of Prizren’s first creative hub through a series of co-creation workshops bringing together local cultural associations, heritage institutions (museums), creative entrepreneurs and public authorities. The hub will facilitate knowledge transfers, experimentation, cross-sectorial collaborations and networking and will offer opportunities to influence the development of the city at economic and social levels by highlighting its cultural and artistic potential.

A unique balance between heritage and contemporary cultural resources

Prizren is considered the cultural capital of the Republic of Kosovo. At the same time, it is home to several cultural and creative industries (festivals, cinema and audio-visual, visual arts, crafts). As such, the city counts on a unique balance between heritage and contemporary cultural resources. After a scoping phase led by KU Leuven and CHwB Kosovo during the ILUCIDARE coaching session (2-4 October 2019), Prizren was selected as the most promising location for the development of the creative hub.

Prizren’s remarkable architectural gems and heritage sites are testimony of diverse cultural influences and traditions. ILUCIDARE partners had the opportunity to visit some of them, including the Kalaja (Prizren castle), the 14th-century Orthodox Levisha Church (Saint Friday Church) which is the only monument in Prizren included in the World Heritage List, and the 17th-century Sinan Pasha Mosque. Prizren’s valuable architecture also includes vernacular dwellings from the 19th and 20th centuries.

Prizren's intangible heritage is very rich as well, notably its crafts (in particular dowry embroidery, tapestry and jewellery, such as the filigree), music and gastronomy (including traditional bread such as cornbread or Leqenik, cheese, meat-based dishes such as tavë, sarma and ćevapi, homemade alcoholic drink rakia). The vibrant city and its numerous crafts shops, bars and restaurant attract local visitors and tourists alike.

Finally, Prizren relies on an extraordinary contemporary cultural offer and it is home to internationally renowned annual festivals, cultural organisations and entrepreneurs.

Many cultural NGOs active in Prizren municipality collaborate through a Network of Cultural Organisations (RrOK Prizren). RrOK is an informal umbrella network gathering around 35 cultural NGOs, some managed by minority communities. Its mission is to increase the quality and number of cultural activities in the municipality and drive local development through cultural tourism. Members include NGOs active in many cultural and creative sectors (including performing arts, audio-visual, festivals and heritage) as well as education and training to reinforce citizens’ engagement and participation in civic life. Remarkably, many of them link heritage (tangible or intangible) with contemporary cultural production.

ILUCIDARE capacity building involved some of RrOK’s partners: the documentary and short film festival DOKUFEST (which attracts more than 50.000 visitors from all over Europe each August), Autostrada Biennale, the first contemporary art biennale in Kosovo and the Lumbardhi Foundation, which operates a social innovation space in a repurposed cinema with two large screens hosting more than 500 people (indoor and outdoor).

The capacity building also included several beneficiaries of the Heritage Space call (e.g. Oral History Initiative) promoted by CHwB Kosovo. The call aims to support young creators from all over Kosovo to develop their creative ideas with the aim of preserving and promoting cultural heritage.

The strategic role of heritage and cultural investment in territorial development

The ILUCIDARE coaching session made it clear that local cultural and creative entrepreneurs needed methodological support. First to better understand the potential of cultural resources to drive territorial regeneration (including youth employment, economic growth, social cohesion, city branding and attractiveness) and second to co-design a strategy and action plan for the implementation of the creative hub. While representing a critical mass to influence urban development in Prizren, cultural NGOs and entrepreneurs needed a new approach to reinforce synergies and roll out a step-by-step plan to better link their cultural initiatives with the broader development plans of the city.

The Network of Cultural Organisations was entrusted with the elaboration of Prizren’s Management Plan of the Historic Centre with the support of local heritage expert Nora Arapi, international expert Rand Eppich and other sectorial experts including urban planning, economy, demography and legal. The Management Plan, financed by the Kosovan Ministry of Culture, is a key strategic document for the safeguarding and valorisation of local cultural heritage. It includes a draft Action Plan aimed to transform the city into a more liveable place. Several activities in the Action Plan focus on cultural heritage potential to boost local development. This draft Action Plan, however, has yet to be formally adopted. The Management Plan and the draft Action Plan are complemented by the Strategy on Tourism, adopted by the Municipality of Prizren.

Despite the existence of such strategic documents that treat the protection of cultural heritage and development of cultural-based tourism policies, the attention of local government towards the potential of creative entrepreneurship and innovation-led activities remains lacking. However the capacity building showed that local authorities seem to fully apprehend the strategic role of cultural investment in the face of other traditional economic sectors (e.g. construction) as well as the potential of heritage resources for local socio-economic development (e.g. youth unemployment, territorial attractiveness).

Cultural organisations get public support through grants and subsidies. Nevertheless, according to the information gathered from participants to the capacity building, public subsidies from the municipality and the Kosovan Ministry of Culture represent only about 10% of their funding. While NGOs and cultural entrepreneurs manage to gather additional funding from international grants, sponsorships and donations, extra support is needed to scale-up and promote these bottom-up initiatives (for instance skills development programmes, international networking opportunities).

In the absence of specific supporting policy and measures, cultural and heritage resources are yet to be fully valorised. As example-, according to figures collected during the capacity building, the Kalaja (Prizeren fortress) attracts more than 5 000 visitors per day during summer, but it barely generates a EUR 30 000 income for the city per year (against high conservation costs). Participants to the capacity building regretted that traditional crafts and knowledge (e.g. filigree, embroidery) were not promoted towards the younger generations and thereby risk falling into oblivion.

ILUCIDARE capacity building was instrumental to provide local stakeholders (cultural and heritage NGOs, entrepreneurs, public authorities) with methodological support to realise their potential and find consensus on a mission statement of the future creative hub. As heritage-led innovation and international relations are new concepts in Kosovo, ILUCIDARE brought a new perspective to tackle the city’s untapped potential.

The methodology was based on the first version of the ILUCIDARE co-creation toolkit elaborated by KEA with the support of IMEC (to be publicly available by the end of the project). KEA and IMEC animated two complementary 1-day workshops with around 20 participants taking stock of proved co-creation methods and techniques.

KEA’s intervention led to a better understanding of the potential of the creative hub to influence the urban policy agenda in terms of increased territorial attractiveness, job creation, education and skills development, social cohesion. Participants were guided to reflect on a shared mission statement for the creative hub and identify some key strategic features (main stakeholders/users, policy support, communication strategies to raise awareness/endorsement).

IMEC built on these findings to support participants to translate preliminary ideas into more concrete actions to support the development of the creative hub. To do so, it applied some of its common methodological tools, in particular the stakeholder mapping model and the Innovatrix methodology for business innovation. This resulted in the identification of all stakeholders who could or should be involved with the hub, and in a focused discussion on the needs of these stakeholders.

Participants agreed on the preliminary joint mission statement for the creative hub. The hub will act as a collaborative platform to make the best of cultural resources to transform Prizren into a creative city. The hub will aim to support artistic and cultural experimentation and production, interdisciplinary and cross-sectoral collaborations to favour innovation, citizens’ engagement, non-formal education and skills development, internationalisation and networking, access to public and private funding.

In the coming months, ILUCIDARE will monitor the implementation of the Declaration of Action and the medium-term development of the hub.

Collaboration, pooling of resources and policy support will be more than ever needed for the cultural sector to overcome the impacts of the COVID-19 pandemic. We wish all Prizren cultural stakeholders strength and resilience during these times!

This article was written by KEA, KU Leuven and Imec with the kind contribution of MSc. Arch. Nora Arapi Krasniqi.

Activity
The coaching session will focus on the Heritage Space Platform supporting heritage as inspiration and a resource for the creation of new products and services in the cultural and creative industries and for local development including youth employment.
Activity

Cultural and creative industries at the heart of the first ILUCIDARE capacity building activity in Prizren, Kosovo!