Reflecting over one year of ILUCIDARE 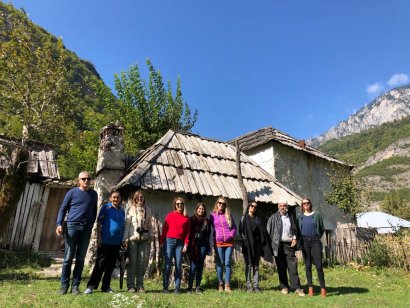 As we enter 2020 with high expectations, ILUCIDARE scientific coordinator from KU Leuven reflects on one year of conducting the project, lessons learnt and the way forward.

The first phase of ILUCIDARE was focused on setting-up the foundations of its network – and it has been quite the journey! Among others, our first phase entailed evidence-based research and mapping of heritage-led innovation cases in the EU and examples of how heritage has contributed to developing international relations. While it was to be expected that this process would lead to interesting results, we could not have anticipated the necessity of such a work. When approaching experts, talking to professionals or discussing ILUCIDARE with the wider public, it became clear that there was no consensus on any fixed definition of heritage-led innovation and diplomacy.  The working definitions developed during the first year of the project bring clarity to the sector, they allow us to explain what we mean to existing stakeholders, they give us the tools to approach new actors – even outside of the heritage sector – and hereby to extend our network.

Working within the ILUCIDARE project has never been a top-down process. During a first series of Focus Groups and Co-Creation Ateliers, led by the International Cultural Centre in Krakow, we discussed the use and possible formats of the future ILUCIDARE publications (handbook, toolkit). In Co-Creation Ateliers in Brussels, designed by our innovation partner IMEC, we then confronted research results with experts and professionals. Thanks to its innovation management expertise, IMEC brought new valuable methods and approaches in the heritage sector.

The aim of this evidence-based research was from the start to develop the results into operational handbooks which can be used by actors working both within and outside of the heritage sector to use heritage assets to create innovation or set-up international collaboration. Within this larger and ambitious goal, ILUCIDARE started validating its own results during different Coaching Sessions in South-America, Sub-Saharan Africa, North Africa, Middle-East and the Western Balkans. These Coaching Sessions were conceived in the first place as a preparation for the ILUCIDARE Capacity Buildings which will start in the coming months. In addition, they allowed us to present the ILUCIDARE results in different locations around to the world. This was helpful in evaluating whether the current format and content of the ILUCIDARE handbooks is already capable of explaining the potential of local heritage assets (often in danger) and to showcase EU examples of heritage-led innovation and international relation building. The aim being to spark new ideas on how to (re-)use, manage and preserve local heritage assets in the future.

A crucial observation that came to the fore in the Coaching Sessions, was the indispensable nature of ILUCIDARE’s partners tacit knowledge of local traditions and working culture. Additionally, it became clear how every partner’s own specificities and focus areas significantly influenced the conception, initiation and development of heritage-led innovation and international relation projects as well as their impact. The implications of long-standing experience working in the locations where ILUCIDARE is active should be reflected in the final ILUCIDARE handbook.
For instance, the University of Cuenca, an academic partner with experience in community projects in Ecuador, focuses on a strong preparation stage and dialogue with the communities in which the ILUCIDARE Capacity Buildings will take place.
Cultural Heritage without Borders has a strong foot in the heritage sector in the Balkans and endorses the potential of taking part in local Capacity Buildings as an organisation, which will undoubtedly benefit the sustainability of actions on the field.
Finally, the World Monuments Fund that has a long-standing expertise in conducting capacity building actions with their experts in Sub-Saharan Africa and the Middle-East, welcomes the ILUCIDARE activities to generate another look at certain challenges, to make linkages to new networks of EU heritage expertise and to codify their tacit knowledge.

In conclusion, the range of expertise and the diversity of consortium partners have proven to be one of the major strengths of ILUCIDARE. The specificity of this project as a Community and Support Action (CSA), allowed for partners with very different profiles to collaborate, generating cross-overs and new benefits throughout every activity that ILUCIDARE engages in. For example, the collaboration with our experienced communication partner (KEA), with ample expertise in the creative industries, has been an asset to every partner. From ensuring that results are not lost in reports but are instead translated into cool and easy digestible formats, to bringing local experiences  to an international audience, they are  bringing innovation in our working culture. ILUCIDARE partner Europa Nostra is particularly engaged in the ILUCIDARE Special Prizes that will be annexed to the yearly European / Europa Nostra awards in 2020 and in 2021. The 2020 Awards received 119 applications from 29 countries, of which 43 entrants have indicated that their project has the potential to receive an ILUCIDARE Special Prize either in the ‘Heritage-Led Innovation’ or ‘Heritage Led Diplomacy’ categories. Stay tuned as the awarded projects in all categories will be officially announced at BOZAR in Brussels on June 21st, 2020!

This report  is the outcome of Task 2.4 in ILUCIDARE: Evaluate and test existing heritage-led innovation and diplomacy mechanisms.